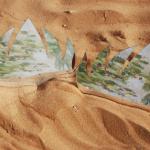 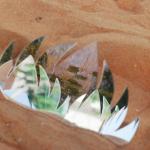 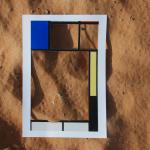 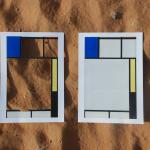 Our everyday culture is filled with disposable images, juxtapositions and appropriation. This is reflected in current art-making practices.

Work that uses pre-existing images, forms, and ideas and leaves the new works open for interpretations and associations from the viewers, acts as an active experience rather than a static idea or form.

When an image is transposed upon on a space a fundamental ontological shift occurs. Is the space the image or is the image the space. When Mondrian's 'composition with blue, red, yellow and black' and Monet's 'waterlilies' were sold for millions of dollars. What is the value of the image as it is reflected into an alien space, a space where it does not belong. Is it the same image as the image when it adorns large international galleries? Are these images when transposed into the desert original images or copies and where is the line between these two concepts drawn?

Banu Colak is an artist/lecturer who currenty lives and works in UAE. Her primary focus is on the meaning of places. Personal and collective narratives are depicted from different times and spaces. She also looks at symbols of place; specifically exploring how they are ascribed meaning by their social, historical and individual contexts.